Dethalbum III is the third real-life album by Dethklok, released on October 16, 2012, featuring songs from the third and fourth seasons of the show.

Brendon Small revealed the album in an interview with Technorati: "There’s a lot of stuff coming this year–I think we’re getting close to Dethalbum III, and I think there’s going to be some cool stuff following that, so I think this is going to be a bigger Dethklok year."

When asked about the album, Small stated: "That’s what the hope is. Again, it takes a long time to organize this stuff, but we’ve got a lot of songs from Season 3 and from all the music I’m writing for Season 4, there’s a lot of new stuff out there and some of it’s really pretty cool." 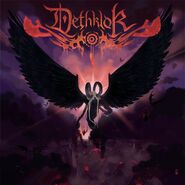 Wikipedia has an article about:
Dethalbum III
Retrieved from "https://dethklok.fandom.com/wiki/Dethalbum_III?oldid=10212"
Community content is available under CC-BY-SA unless otherwise noted.