General Crozier has amnesia about the incident in the Gulf, while Dethklok chooses the fate of prison inmates to get themselves out of the funk they've had since their lives were endangered.

The episode opens with a dream General Crozier had. He is at the bottom of a fiery pit with Dethklok, Cardinal Ravenwood on a crucifix, and Mr. Salacia. Crozier is then shown at the doctor's office. He seems to have forgotten much about the happenings of the previous episode. He was told Cardinal Ravenwood had a heart attack and died. His doctor mentions nightmares and gives him a prescription.

The news tells of a worldwide recession due to the disappearance of Dethklok publicly. This causes fans to be hysterical. Offdensen tells the band they need to start recording soon. Pickles compares him to a robot, and the band agrees. Toki maces the turkey, as no one wants anymore of it. The whole band is equipped with pelvic-thrust mace belts. They all go outside to practice using them. Charles deems them unpractical, as they don't mace the face, rather the balls. Charles

brings up the record again and Nathan tries to flip the picnic table. This, however, does not work, as Charles has had the table bolted to the ground. Once again, Charles is called a robot.

In a funk[edit | edit source]

Back in Mordhaus, the band is in their hot tub. Charles believes there is a way to lift the band's overall mood. Toki is worried that the fans will attempt to kill them again. Charles informs them a bunch of prisoners are to be executed, and they have been asked to choose how they die if they will perform. Nathan agrees because it's awesome, but it must be brutal. Some prisoners want to be killed by Dethklok, for it is an honor, while others disagree. Many fans waiting for Dethklok have died due to the extreme heat. A machine drills its way to the surface and Dethklok is inside.

Prisoners have been attached to rockets which are launched into the sky. These rockets are then shot at by a laser atop the machine Dethklok is in. Body parts fall from the sky and land on unsuspecting peoples. Skwisgaar pelvic thrusts and mace shoots out of his belt. It falls through the floor and into the eyes of one of the two Klokateers driving the machine. He then knocks out the other man in control. The machine kills innocent bystanders, harms a newscaster, and releases a bunch of prisoners who then proceed to kill some of the cops. Due to the performance, the economy goes up. The band apologizes for calling Charles a robot, and call him a butler. Pickles refers to the incident at the prison "a happy accident". The band complains about little things that bothered them. When Charles mentions the new record, Murderface calls him a robot.

"You blinded my balls." 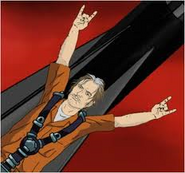 Goat's head falls the couple's car
Add a photo to this gallery
Retrieved from "https://dethklok.fandom.com/wiki/Dethecution?oldid=14771"
Community content is available under CC-BY-SA unless otherwise noted.