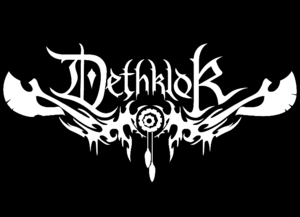 Dethklok is the self-titled virtual album debut by Dethklok on Metalocalypse. The album was made soon after Toki Wartooth joined the band. It was a huge success and contributed to Dethklok's popularity, the album was certified "Super Platinum". The album was released on Crystal Mountain Records, a label Dethklok had signed to while Magnus Hammersmith was still in the band.

The tracks for this album are unknown but a presumed song featured on the album can be "The Hammer" because it was a song that Dethklok was working on while Magnus Hammersmith was still in the band and had likely not seen a release.

The album being printed

Dethklok receiving their "super platinum" award for the album

The chart position for the album
Add a photo to this gallery
Retrieved from "https://dethklok.fandom.com/wiki/Dethklok_(album)?oldid=11352"
Community content is available under CC-BY-SA unless otherwise noted.