Dethklok does have a touring band, although there are no actual human counterparts to the characters on the show. The band consists of show co-creator, vocalist/guitarist Brendon Small, who writes and sings most of the music for the show, alongside drummer Gene Hoglan, bassist Bryan Beller, and second guitarist Mike Keneally.

In late 2007, Adult Swim organized a promotional tour featuring Dethklok and ...And You Will Know Us by the Trail of Dead. The tour comprised performances at twelve college campuses, with tickets available to students only (except for 50 tickets set aside for the UCLA show in the Los Angeles area). The band featured Brendon Small, guitarist Mike Keneally, bassist Bryan Beller and drummer Gene Hoglan. Tour information was made available on Adult Swim's promotional site. In an interview with Ultimate Guitar, Brendon Small described the tour as being "like Gorillaz, with the animated characters" with Small's ensemble of musicians performing visibly. 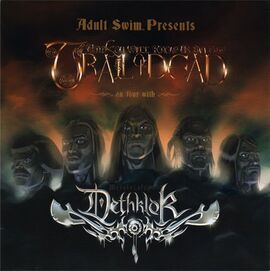 The college dates for the tour were as follows:

In a February 2008 interview on California radio station Indie 103.1 with Full Metal Jackie, plans for a summer 2008 tour were announced. Brendon Small described the tour as being like "a Disney ride but with murder". Dethklok toured the US in June and early July with Chimaira and Soilent Green. In April 2008, 27 seven dates were announced. 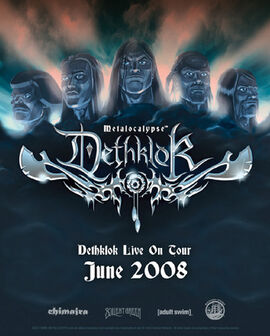 The dates for the tour were as followed:

Dethklok toured with co-headliner Mastodon with special guests High on Fire and Converge during October and November 2009 in support of the Dethalbum II. 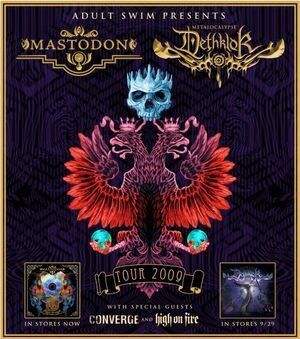 The dates for the tour were as followed:

Dethklok toured North America, in support of Dethalbum III, with Machine Head, All That Remains and The Black Dahlia Murder during November and December 2012. Bassist Pete Griffin filled in for several shows while Bryan Beller was touring with his band, The Aristocrats. 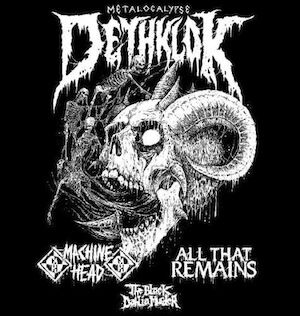 The dates of the tour were as followed:

The band was scheduled to co-headline a tour in North America with Lamb of God (with special guest Gojira) in August 2012; this tour was cancelled due to bail hearings at the time for Randy Blythe in the Czech Republic. As part of the tour Dethklok was scheduled to play in Toronto, Ontario at the Heavy T.O. festival on August 11, 2012, and also in Montreal, QC at Heavy MTL Festival on August 12, 2012; however, Dethklok's appearances at both festivals were cancelled. Dethklok was also scheduled to play the main stage for both days of Knotfest on August 17 and 18, 2012; however, Dethklok's appearance was cancelled. 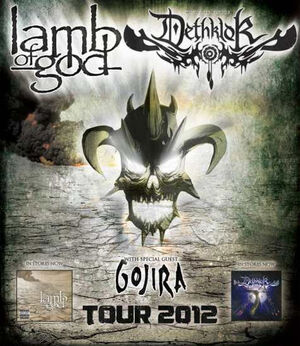 The planned dates for the tour were as followed:

Retrieved from "https://dethklok.fandom.com/wiki/Dethklok_touring_history?oldid=14886"
Community content is available under CC-BY-SA unless otherwise noted.