“If he wants Dethklok dead, I'm sure he can make it happen.”
— General Crozier

The Metal Masked Assassin, also known as the Man with the Silver Face, one of the two villains in The Prophecy, the other being The Man who Stands Behind Shadows. He was the primary antagonist of Dethklok throughout the first 4 seasons.

He is voiced by George "Corpsegrinder" Fisher of the real-life band Cannibal Corpse. He is a mysterious psychopath who wears a metal mask and regularly dismembers people hanging from hooks (a reference to the Cannibal Corpse song "Meat Hook Sodomy",), apparently while they are still alive.

His personality is incredibly violent. He tortures and attacks innocent people with no regard. He is very aggressive and sadistic taking pleasure in attacking Charles. The only little humanity that he had was his love for his brother (Agent 216). When he found out that Dethklok killed him, he became angry and vengeful towards them. He swore to destroy Dethklok and everything and anything related to them.

In contrast to his brother Agent 216, he seems slightly deformed overall, including in images of his younger self with slightly misshapen facial features and muscles.

He was born with white hair, his appearance was normal during his teenage years, he began to wear the mask some time after he trained in his adulthood as a killer. It is possible he is albino.

When he makes an appearance in the series he has veins across his body. His body is covered in scars. His misshapen muscles and facial features more prominent then his younger years. In contrast to what little can be made out of his brother he also shows signs of premature aging, which is normally associated with substance abuse. His skin was much paler in comparison to his brother's, even when they were teenagers.

What little is known about his younger years is that he never knew his mother and was initially abandoned. His mother died during childbirth (presumably during his own birth), leaving him only a brother (Agent 216). The pair trained to kill whomever came across their path.

General Crozier had sent his brother to kill Dethklok in Murdering Outside The Box). General Crozier recruits him for the assault on the Dethwater concert, supposedly so he can avenge his brother's death, although Crozier has ulterior motives. As he prepares to kill Skwisgaar and Toki, he is seriously wounded by Offdensen, who breaks his right arm, stabs him in the kidney, and kicks him into a body of water.

He returns in the episode "Dethvengeance", alive but now wearing a metal support for his formerly broken arm. He forms the Revengencers with Edgar Jomfru, who escaped from Dethklok's underground prison. He seems to have developed a grudge against Ofdensen and wants him dead, realizing that doing so would cause Dethklok to fall apart and make them easier to eliminate. It should be noted that in su

btitles he is referred to as "Selatcia" though the connection remains unclear (it is most likely an error).

In The Revengencers, he expresses his pure hatred for Ofdensen, devoting himself to "crucify[ing]" the man who protects Dethklok. During Dethklok's concert at the hospital, he kills a guard, steals his hood, and sneaks up on Ofdensen, catching him by surprise. He quickly overpowers the surprised manager and throws him out of a window which is many stories high; but Ofdensen somehow lands on his feet, virtually unharmed. He then gathers up the other members, as the Revengencers' presence has been discovered, and escapes.

In Dethrelease, he is shown to have eluded Ofdensen's numerous attempts to find him, and fronts the assault on Mordhaus itself during their CD release party. He personally fires the main weapon that brings Mordhauss' shields down and sets the building on fire. Ofdensen leads the counter-attack, personally destroying the main weapon, but the Metal Masked Assassin steals one of the Dethsoldiers' hoverbikes and chases Ofdensen down a long passageway in Mordhaus. After the teenager Revengencer shoots Ofdensen with a crossbow, piercing him completely through the chest and knocking him off the bike; The Metal Masked Assassin then begins beating Ofdensen mercilessly, and pulls out a knife to torture him with before he dies; Ofdensen gasps slightly in response, but does not move otherwise. As he threatens to torture Ofdensen, Nathan Explosion knocks the Metal Masked Assassin out with a large, flaming wooden beam, and says "That's my bread and butter you're fucking with." (A direct reference to 'The Metalocalypse has Begun', in which Ofdensen said the same thing when the Assassin was trying to kill Skwisgaar and Toki.)

It is unclear what happens to him after this; however the final scenes show Ofdensen lying motionless and wounded, while the members of Dethklok stand motionless over him.

While it was revealed at the beginning of Season 3 that he failed in killing Ofdensen, his fate after being struck by Nathan remained unclear.

He returns in Season 4 episode, Bookklok, where it is revealed in a Tribunal meeting that he and the surviving Revengencers have regrouped in the forest surrounding Mordhaus, with him as their leader. He is also briefly seen mentioning to his now insane and cannibalistic followers, to have gained a new weapon and someone on the inside (Magnus Hammersmith) working for them.

In Church of the Black Klok, he leads an attack on Dethklok during Roy Cornickelson's funeral. A bomb is set off and opens where he and the Revengencers climb out. Here, he once again does battle with Ofdenson. They fight until Ofdenson kicks him to the ground. Then the Assassin gives Magnus Hammersmith the order to stab Toki (however not killing him), and take him. The Assassin, Hammersmith, and the Revengencers then seemingly escape.

In The Doomstar Requiem, it is revealed that the Metal Masked Assassin is using Toki and Abigail as bait, luring the rest of Dethklok. When the remaining members of Dethklok reach him, the Revengencers surround them, as the Metal Masked Assassin approaches, with the intent on killing them himself. However, Ishnifus Meaddle provided a distraction, allowing them to escape.

After being captured, Ishnifus states he does not fear the Metal Masked Assassin. Enraged, he replies "You are a fool, and you must die", and executes him. He then finds Dethklok re-united. He expresses rage at the death of his brother, while Nathan replies that the band won't let him take their brother. He is killed after Dethklok, together, activate the power of the Doomstar, destroying him.

The relationship between Offdensen and the Assassin is that of mutual enmity and grudging respect. In their initial meeting, the Assassin had his guns pointed at Offdensen who simply took off his tie with his hands at his sides, a direct challenge to the Assassin. After being beaten with his arm broken and stabbed with his own knife the Assassin focuses most of his rage on Offdensen. While this is due to the fact that he was beaten it is also because he only views Ofdensen as a genuine threat stating that Dethklok is nothing without Ofdensen. After almost being killed in their second encounter Offdensen likewise sees the metal masked Assassin as a true threat by telling the elite Klokateers to watch out for him specifically and another Klokateer walking in afterward saying that they still haven't found him. Offdensen expresses his frustration in this by stating "Where are you, you crafty son of a bitch". 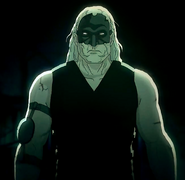 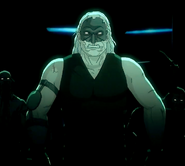 The masked Assassin as an abandoned baby

The Assassin and his brother as teenagers
Add a photo to this gallery
Retrieved from "https://dethklok.fandom.com/wiki/Metal_Masked_Assassin?oldid=14672"
Community content is available under CC-BY-SA unless otherwise noted.