Metalocalypse Now is a month long social campaign to encourage Hulu and Adult Swim to co-fund the ending to Metalocalypse. A website appeared on September 30, 2015 with a countdown timer, counting down until October 8, 2015 at 1:45pm EST, the time when Brendon Small was scheduled to host a panel at New York Comic Con. Brendon Small announced that the Metalocalypse Now website is a place for fans to go and sign a petition to show Hulu and Adult Swim that there is significant support for the show.

Following the end of October (or "Kloktober"), the mobilization efforts of Metalocalypse Now have ceased and Brendon Small will now contact Hulu to see if they will support a finale. Small still encourages everyone to still be passing around the petition to gain signatures.

Prior to the existence of "Metalocalypse Now", the future of Metalocalypse had be widely unknown. A Change.Org petition was created to press Adult Swim to fund a fifth and final season of the show but Brendon Small later revealed that they turned it down. As of October 2015 the petition has garnered over 33,000 signatures. Since Adult Swim had turned down the idea of a final season for the show, Metalocalypse fans took it upon themselves to look for alternatives. Since the entire Metalocalypse series is on Hulu Plus, it became a desired location for fans to focus their campaigning efforts. A social media ad campaign begun where fans contacted Hulu frequently requesting them to pick up the series, with Hulu giving positive responses to that possibility. Since one of the very few accounts the Metalocalypse Now Instagram page is following is Hulu, many suspect that the Metalocalypse Now might be related to these efforts.

Brendon Small announced "Metalocalypse Now" at NYCC, explaining that it was his attempt to gather fan support to encourage Adult Swim and Hulu to come together to co-finance a finale to Metalocalypse, entitled: Metalocalypse: The Army of the Doomstar - The Final Chapter. The reason for this is because Hulu had obtained the rights to the show since their service contained the entire Metalocalypse catalogue. The "Metalocalypse Now" website recommends 3 ways for fans to take action: 1) Tweet @Hulu and @Adult Swim, asking them to fund it; 2) Sign the Change.org petition; 3) To mail in guitar picks and a letter to the head of content team at the Hulu headquarters. Soon after the campaign was announced, the petition quickly gained an additional 15,000 signatures.

In April 2016, Adult Swim teased the idea of a Metalocalypse revival. A live stream of a printer was setup and Adult Swim stated that if they received at least 25 faxes of petitions asking them to sign the petition to bring back Metalocalypse. After receiving well over 25 faxes, a video was released of an Adult Swim contractor signing the petition. Initially when these events took place it created speculation that Adult Swim was gearing up to announce a new season of Metalocalypse. In actuality it was simply just them making fun of the fan's attempts to bring back the show.

As of May 2016, the petition has reached close to 100,000 signatures. In an interview with Metal Insider published on 25 May 2016, Brendon Small stated that financial backers had stepped forward to fund the project for Metalocalypse finale. However, Adult Swim ultimately turned down the offer stating that they did not want make anymore Metalocalypse episodes at all. In the same interview Small stated that Dethklok albums would also cease to be made because Adult Swim has not been lenient with lending out the "Dethklok" name. Brendon Small assures the fans that a Metalocalypse finale will come eventually, he just cannot specify how.

“The network was kind of dangling this final thing after Doomstar in front of me and then they said they didn’t want to do any more episodes. I asked why not and they said it was for financial reasons. Then the whole Metalocalypse Now fan campaign started and they got in touch with me and said ‘hey what can we do to save this show?’ They were saying that they didn’t have enough money, but I thought if we caused enough noise, some financial backers would show up. They actually did, and some people that were willing to offer just shy of two million dollars stepped forward and said ‘we would love to finance the show and do this final mini-series,’ and the network said ‘no, we don’t want to do anymore Metalocalypse at all,’ and that was the end of it.”
— Brendon Small

“It turns out Adult Swim doesn’t want anyone to have Metalocalypse, not even themselves. They just want old re-runs. They paid for it, so they can take their ball and go home with it, and that’s how show business works, for better or for worse. They said just a flat out no, and they get to do that. And if I had paid for the series, then I would get to make the decisions, but I didn’t pay for it.”
— Brendon Small

In October 2016, Brendon Small shed more light on the situation:

““There was no debate, there wasn’t even a returned phone call. It was a hard ‘no.’ It was about as hard of a ‘no’ as you could possibly get … It’s basically like a crappy relationship at the end where we should probably break up, but they kept on dangling the idea of doing this thing in front of me and then dangling other TV show ideas and stuff like that. What I think really happened was [‘Metalocalypse Now’ campaigners] drove Adult Swim insane. I think Adult Swim, for some reason, took it very personally. The truth was that people were saying, ‘Hey, what the hell? Where’s our show? We’re here for this show, can you give it to us? We’re gonna watch it like crazy,’ and [Adult Swim] said no. I think somebody’s thin-skinned and somebody got their feeling hurt.””
— Brendon Small

The campaign has also been supported by well known metal musicians such as Kirk Hammett and other people who have been involved with Metalocalypse in the past, as well personalities who are fans of the show.

"Metalocalypse Now" is a reference to the 1979 film Apocalypse Now, both with the name and the logo. 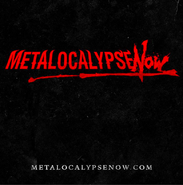 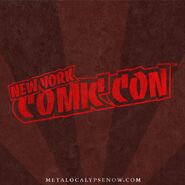 Add a photo to this gallery

Retrieved from "https://dethklok.fandom.com/wiki/Metalocalypse_Now?oldid=14281"
Community content is available under CC-BY-SA unless otherwise noted.