“In the harvest, they dry and whither, and the sun did cease to shine. The hour of forebodement was upon us.”
— Ishnifus Meaddle

"Motherklok" is the fourth episode of the fourth season of Metalocalypse, fifty-third overall. It aired on May 20, 2012, on Adult Swim.

The world is angry at Dethklok for tanking the economy after their latest album is not released. Pickles tries to bond with his mother and becomes a realtor in an attempt to get on her good side.

An unknown voice recites "In the harvest, they dry and whither, and the sun did cease to shine. The hour of forebodement was upon us." as whales look on the wreckage of the ships that carried the new album.

Six months after bizarre storms prevented any of the new albums to be distributed to the public, the world's economy is tanked in the nicknamed "Dethcession" and most people blame Dethklok for it. In response, Dethklok will hold a series of fairs in the United States in hopes of raising both morale and revenue. The first Deth Fair will take place in Tomahawk, Wisconsin; the birthplace of Pickles.

At the location where the fair is being constructed Nathan tries to get the crowd excited talking about what will happen in the fair, even though he's unclear on why they're giving a free concert. The attractions include: a pirate ship with real Somali pirates; a colossal Dorito that the fans will be timed in eating and a million-dollar Ferrari wheel (a Ferris wheel with Ferraris in it). The crowd interrupts Nathan and heckles him, shouting that they would rather have jobs than the hedonistic fair. Nathan answers that if they're all so angry, they should all commit suicide, angering the crowd further. Nathan curses at the crowd and slaps the microphone away. Then he turns to the band and says that he thinks that went well; Skwisgaar agrees with him. Not far off, Pickles is talking to Molly, saying that they had a rocky relationship in the past but he was to be closer to her as mother and son. Molly interrupts him and says she's disappointed in him for ruining the economy and not having a real job. She says his job as a professional musician is a joke and that she respects people with "honest careers" like carpenters, dentists, and realtors. She calls him spoiled, and Pickles replied that the real spoiled ones are his servants, "the assholes". Molly says that it's hard for real workers to be around an overpaid, out-of-touch celebrity like him; she then declares that until he behaves like a real person, they will never have a relationship.

Charles warns the band that their public image is on the line and they should try to appear hands-on about fixing the economy. He also has a real-estate license lined up for Pickles. Toki asks what the license is for and Skwisgaar says it sounds like a license to drive a house, which makes the band laugh. Pickles starts yelling that his mother was right, that none of them have done an honest day work in their lives and they're the reason the economy went bad. Nathan tells Pickles to calm down; he says that Molly is a bitch and Pickles should tell her "to go f*ck herself". Pickles gets offended about that remark about his mother but Skwisgaar agrees with Nathan. Pickles angrily replies that they're talking about his family and Nathan reminds him that he hates his family, and Skwisgaar points that Pickles himself has called his family assholes often. Pickles concedes that he has, but he also says that he has been thinking that maybe Dethklok are is assholes, which shocks the band. He says that's the reason he will start to sell cars. Nathan gently corrects him that it's houses.

The Tribunal considers the development of Pickles becoming a realtor and calls for Dethklok economist Dr. Richard Reinhold Rnawighiwowpj. Dr. Rnawighiwowpj explains that the Dethcession has caused some people to make odd choices, Rock n Roll stars have taken side jobs as dental assistants, paralegals, EMT and, IT technicians. He then says that Pickles the drummer "has been frightened into becoming n scheming, deceptive realtor", a remark that makes Crozier grunt in disgust. Dr. Rnawighiwowpj knows that the bigger reason for Pickles' "social demotion" is him seeking his mother's approval. Not even being in the biggest entertainment act in the known universe is enough for Molly, she will always favor underachieving Seth over Pickles. He concludes that Pickles will never be free of her abject disapproval until he tells her to go f*ck herself. In a later secret meeting, Vater Orlaag says that the loss of the album makes their hand certain and Salacia replies that it's time for them to take Falconback into their own hands.

At the site of the fair Dethklok still show disdain for the people they're supposed to be helping and make fun of Pickles for working "like a regular dildo". Pickles angrily replies that he'll be good at it and yells "so f*ck you!" to each of them before asking if they want to buy a house. In a short montage, Pickles seems to be doing well at first, since his clients say they love their house, but when he says they asking price is $200,000 they reply they don't have any money. He also finds another realtor trying to show the same house at the same time and he punches him after the other realtor says it's fun. He has a lot of trouble; one of his houses has dog poop covering the carpet; another has a basement without stairs that causes the prospective buyer to fall and injure himself horribly and another has a gas fireplace that blows up in his face when he tries to show it, eventually burning the whole house down. Eventually, Pickles just sits dejected in front of the smouldering house, saying he's not a good realtor and he has a (drug induced?) vision of his mother telling him he's indeed the worst realtor in the world and he can't do anything right, not even sell one house. Pickles tries to defend himself saying that even people like the houses, they have no money to buy them, but he has. He repeats this to himself a couple of times before coming to a new conclusion. He tells his "mother" to wait a bit longer and she is replaced with a vision of an octopus staring at him from space.

Back at the construction site, Nathan, Murderface, and Skwisgaar are getting pretty excited about the planned rides for the fair. There are the Cephalic Annihilator, the Bilateral Executioner, the Scrotal Hanger, the House of Ancient Torture Devices, the Kitty Kats Petting Zoos. Toki reveals he planned the last one, he's the only one happy about it. Meanwhile, Pickles starts buying all the houses himself and his sales increase record time. In the construction site Nathan asks Charles if everything is all right, Charles says Pickles is becoming really adept as a salesman and that if he continues to seek his mother's approval it could interfere with the future of Dethklok. He cryptically says "one cannot serve two masters, Nathan." Nathan mumbles in agreement and then both say that they're sure the situation will be fine.

The Dethfair is finally unveiled and it seems to be a success. Dethklok begins their concert and the audience enjoys the rides. Unfortunately, some screws at the House of Ancient Torture Devices come loose, which sets off a chain reaction that ends up in the whole fair burning and many people dying. At the end of the episode Molly is berating Pickles again, telling him to quit being a realtor and go back to making music so the economy picks up again. Pickles is exasperated since she doesn't seem to care he's the best realtor in the world. Molly says that she indeed doesn't care, she wants him back in his "stupid" band so the economy can get fixed. Pickles then remembers that Nathan, Skwisgaar, and Charles advised him to tell his mother to go f*ck herself. He does exactly that, shocking Molly. 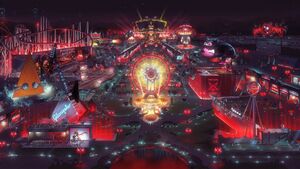 Dethfair
Add a photo to this gallery
Retrieved from "https://dethklok.fandom.com/wiki/Motherklok?oldid=14849"
Community content is available under CC-BY-SA unless otherwise noted.