Seething Vortex is the third known virtual Dethklok album by Dethklok. It was unveiled in Season 4 and subsequently the shipments of the album was destroyed in a massive global storm before being released to the public. The master record was also destroyed by Nathan Explosion who felt that the album was not right for release. Only one note of song was ever heard by anyone outside of the record process as released in a public "One Note Preview". 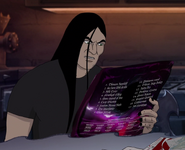 Seething Vortex back
Add a photo to this gallery
Retrieved from "https://dethklok.fandom.com/wiki/Seething_Vortex?oldid=10098"
Community content is available under CC-BY-SA unless otherwise noted.