The Dethalbum is the debut album by Dethklok, from the television show Metalocalypse. It was released on September 25, 2007. The album features full-length songs from the television series, as well as previously unreleased tracks. Antonio Canobbio contributed the artwork for the record.[1]

The deluxe edition of the album includes an additional disc that features seven bonus tracks, the video for "Bloodrocuted", and the first Metalocalypse episode of the second season.

"Hatredcopter" was released prior to the album's release on the European edition of the Saw III Soundtrack.

The album debuted at number 21 on the Billboard 200 chart, with 33,740 copies sold in its first week.[2] [3] The Dethalbum was also streamed 45,000 times when it went live on AOL Music during the week of its release. The album has sold over 172,428 copies making it the highest charting death metal album ever at the time, only to be surpassed two years later by its successor, Dethalbum II, which charted at 15 and sold 45,000 copies in its first week.

An earlier, shorter version of the song "Thunderhorse" is featured on Guitar Hero II. It is used in the game without the extra vocal effects such as echo that were in the final version.

In July 2008, Williams Street began selling a vinyl version of the Dethalbum on their online store.[4] This version contains every song from the standard album, along with the "Gulf Danzig" remix of "Go into the Water."

Except "Murmaider" and "Go into the Water" that were recorded miles below the earth's surface in the Dethsub studio deep within the Mariana Trench.
"Better Metal Snake", "The Lost Vikings", and "Thunderhorse" aka "The Viking Trilogy" recovered from sessions deleted by Nathan Explosion. 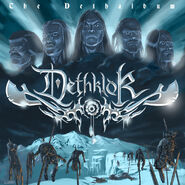 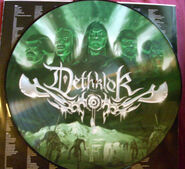 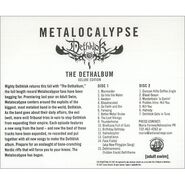 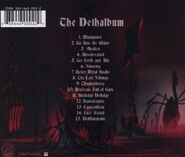 Back of the dethalbum (standard version)

Wikipedia has an article about:
The Dethalbum
Community content is available under CC-BY-SA unless otherwise noted.
Advertisement