“You are the ones for whom we have been waiting thousands and thousands of years... You are the chosen ones.”
— Ishnifus Meaddle

The Prophecy is a series of sacred texts and cave paintings detailing the true nature, power, and destiny of Dethklok. It is the basis of the belief system followed by The Church of the Black Klok and the reason Charles Offdensen dedicates his life to protecting and guiding the band. It is also a frequent topic of discussion for The Tribunal, though their motives are still unclear.

The Prophecy is the Metalocalypse (literally meaning; "apocalypse of metal") itself, an impending apocalypse of metal. Dethklok are "the chosen ones," a collective supreme force that the fate of the universe hinges upon. They are, for lack of a better word, Gods. Dethklok themselves are not made aware of any of this until the end of Season IV: Church of the Black Klok, when they are introduced by Charles Offdensen to Ishnifus Meaddle, the high holy priest of The Church of the Black Klok.

The Metalocalypse was foretold thousands of years ago. According to Cardinal Ravenwood,according to ancient scriptures ,the band had to be killed or the Metalocalyse would begin. However, the start of the Prophecy ended up occurring anyway due to his demise in The Metalocalypse Has Begun after Mr. Salacia claims the pair betrayed him.

Its mentioning is found in Sumerian text and even in remote tribal areas statues exist portraying the band such as seen in Dethcarraldo. Several characters within the show are tied up in the prophecy, including Dethklok themselves.

The prophecy also foretold of the bands split and Toki's kidnapping, as it would be the turning point that brought the band together. As of the Doomstar, Charles had noted how the Metalocalypse was now creeping in everywhere turning everything metal (both in terms of music and literal) and it was time to look to the band for salvation. In the process, foretelling that for Dethklok to succeed, one member of the Church of the Black Klok would have to sacrifice their life for the sake of the band. This turned out to be Ishifus himself.

A number of cryptic words were spoken throughout Season4 at the start of episodes, each referring to the most major aspect of the episode and spoken by Ishnifus Meaddle. These events were considered the most major lead upss to the eventual prophecy being fulfilled;

Dethklok directly exhibits a supernatural power for the first time when they defeat The Man With the Silver Face using The Dethlights at the end of The Doomstar Requiem. They disintegrate their enemy using lightning beams.

Throughout the series the five characters are shown to be able to provoke severe weather phenomena and freak accidents with their presence, particularly when playing music together. Though strange things constantly happen around them they are not only immune to these accidents but also rarely react to them, sometimes not even noticing that people are dying around them.

They are also superhuman in their ability to garner the love of the masses with their charisma; people worship them throughout the world and will do absolutely anything for Dethklok.

Their powers only seem to work when the five of them are united, hence their immediate rise to power after meeting Toki, the fifth member. If Dethklok disbands or a member is lost then The Prophecy is disrupted.

The Curse of Dethklok is also likely a related "power", though an indirect one at best.

The five current members of Dethklok each seem to represent a particular sort of innate individual power within the collective force: 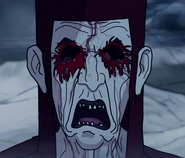 The death of a religious figure

The medallions in Salacia's armor bear the faces of Dethklok

Pictograph symbols that go with the medallions

Retrieved from "https://dethklok.fandom.com/wiki/The_Prophecy?oldid=14632"
Community content is available under CC-BY-SA unless otherwise noted.